Over the past few years, the world has witnessed a considerable fall in the cost of solar energy, particularly considering the price of rooftop and PV solar panels. Solar energy, that entered the market place only recently, at very high price, is now considered as an alternative source of power, competing with coal, natural gas, hydro and nuclear power. Even if it makes up only 1 percent of the electricity market at present day, the International Energy Agency has estimated that solar energy will be the most prominent single source by 2050.

The following graph from investment bank Sanford Bernstein shows clearly the potential impact that solar energy will have to the $5 trillion global energy market. In fact, in the future, the spreading of solar energy will have an immense impact on energy price deflation, which can lead to adverse consequences to fossil fuel industries that rely on continued growth. Recently, solar prices have fallen so fast, that soon they will undercut other energy sources such as fossil fuels, coal, oil and natural gas. 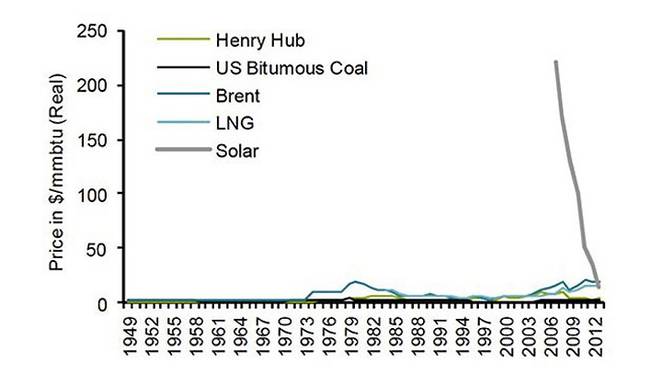 The Cost of Production Today

According to Deutsche Bank, the total module costs of leading Chinese solar companies have decreased from around $1.31 a watt in 2011 to around $0.50/W in 2014. This has happened mainly due to the lowering processing costs, the fall in polysilicon cost and advancement in conversion efficiencies. That has led to a falloff approximately 60 per cent in just three years. Deutche Bank adds that the costs could fall another 30-40 per cent, over the next years, once the scale and operating efficiencies are developing even further.

Cost of Solar has stated that although the share of solar PV in the global energy market is currently still small, this situation will change in the following decade, since the technology will evolve and make solar energy cheaper. Solar energy is already eating away the margins of oil and gas demand. Also, for developing countries, it is going to be a clean, convenient and reliable choice of energy, helping to cut down the demand for diesel and kerosene.

One of the great things about the dropping cost of solar energy is that more and more people, who don’t necessarily have to be millionaires or scientists, can afford installing  the panels in their homes. It is turning into an alternative energy source, resulting in lower energy bills and greener footprint. With rising energy costs, it is wise financial decision to choose solar energy, especially in terms of low monthly energy costs from day one. Since there are still some single-minded stereotypes about solar homeowners, such as comparing solar power with flower power, or suggesting that solar energy is only meant for environmentalists or wealthy people, the solar companies are responding to this misconception by emphasising the financial rewards of solar panels, rather than pursuing the feel-good “save the Earth” type of marketing.