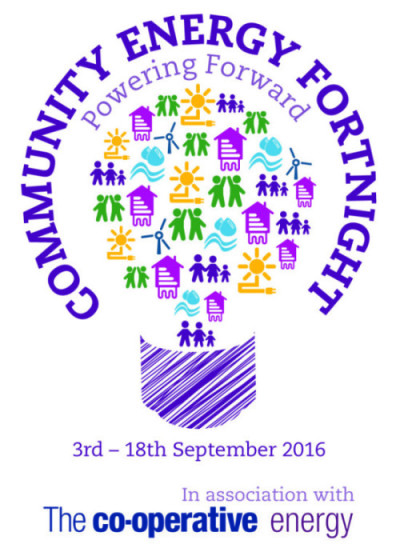 The fourth Community Energy Fortnight will run from 3rd to 18th September and has been supported by The Co-Operative Energy. As with previous years, the fortnight will showcase inspiring examples of communities who are generating renewable energy and wasting less by embracing new technologies.

Community Energy has seen some dramatic shifts in the last year, including the withdrawal of financial support models such as the Feed-in Tariff, however throughout the changes the sector has seen record levels of deployments. This year’s Community Energy Fortnight will be exploring options and discussing the challenges and opportunities ahead, with the theme Powering Forward.

The Fortnight will begin with the Community Energy Conference, which will be exploring various topics including the role of local governments, crowd-sourcing as a model of finance and the EU’s new Renewable Energy Directive. The Conference will be followed by the Community Energy Awards, which will be an evening to celebrate achievements in the sector.

The run up to the Fortnight and the events themselves will all be covered on the @CEFornight with the hashtags #CEF16 and #poweringforward.

Please note that starting from 27th February 2020, we are no longer accepting new media partnership proposals. Thank you for your interest!