Cork is one of nature’s most extraordinary products which is quickly becoming a sustainable substitute for a wide range of products thanks to its variety of useful properties. Cork is harvested from the bark of the cork oak, which grows in forests in Portugal, Spain and across North Africa.

These cork oak forests also boast one of the most diverse ecosystems found outside of the Amazon or Borneo rain forests, with hundreds of different species calling them their home. In addition, a range of vulnerable and endangered animals that are endemic to the cork oak forests rely on this unique environment to survive. 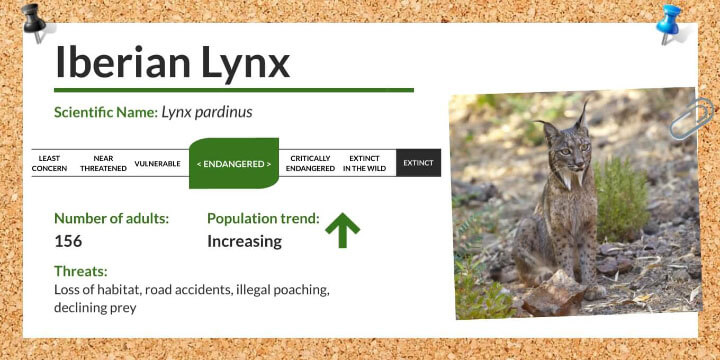 The Iberian lynx is the most endangered feline species in the world and relies on cork forests for shelter and as a hunting ground. Surveys conducted in the early 2000s discovered that the number of adults had fallen to less than 100, which were split between two breeding groups.

Despite conservation efforts preventing the extinction of the lynx, it still faces a number of threats, leaving its future uncertain. These threats include habitat loss, declining food source, poaching and car collisions.

Rabbits are the favourite food of the Iberian lynx, however, rabbit populations have fallen due to epidemics which has, in turn, negatively affected the lynx’s population. New infrastructure, such as roads, separates and creates barriers between lynx populations and causes an increase in car collisions. Finally, poaching still threatens the Iberian lynx as well as accidental deaths from snares set for other animals.

The Lynx Programme was launched in 2004 with the aim of protecting the lynx’s habitat. The programme also has the ambitious aim of demonstrating how local economic activities, such as harvesting cork, can be compatible with wildlife conservation. 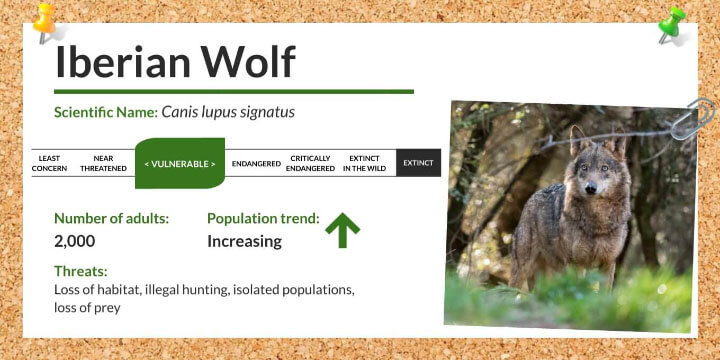 The Iberian wolf is a subspecies of grey wolf that is native to the Iberian Peninsula. Most of the Iberian wolf’s 2000 adults are split over 350 packs distributed across northern Portugal and northwestern Spain.

The Iberian wolf’s population is steadily increasing but still faces a number of threats, including illegal hunting, loss of prey and continued loss of habitat. Hunting of the Iberian wolf is legal in Spain, but not Portugal, however, very few permits are given each year. Due to the rarity of sightings of the wolf and their elusive nature they are considered “big-game” trophies and many hunters hunt them illegally. 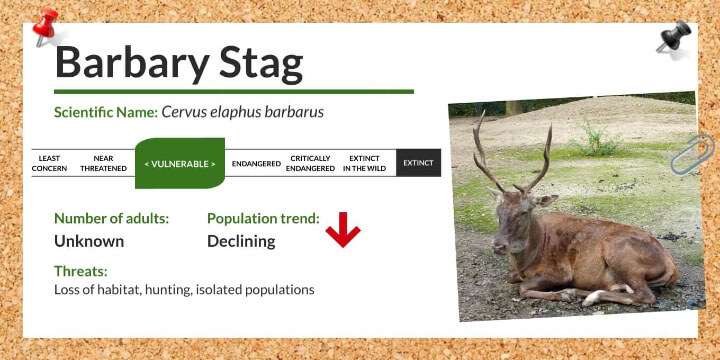 Not all of the vulnerable or endangered animals on this list live on the Iberian Peninsula. The Barbary stag, for example, is a deer that is native to the North African coast. The deer thrived in the forested areas of Algeria, Morocco and Tunisia before it was nearly hunted to extinction.

The Barbary stag was reintroduced to Morocco from Tunisia in the 90s and there is a protected population in the Tazekka National park. The deer lacks any natural predators and is instead threatened by the continued loss of habitat, isolated populations and poaching.

Urbanisation, growing agricultural activities and forest fires have fragmented the cork forests of North Africa which has impacted the deer’s population. The number of adult deers is unknown but it is estimated to be in decline due to hunting and loss of habitat. 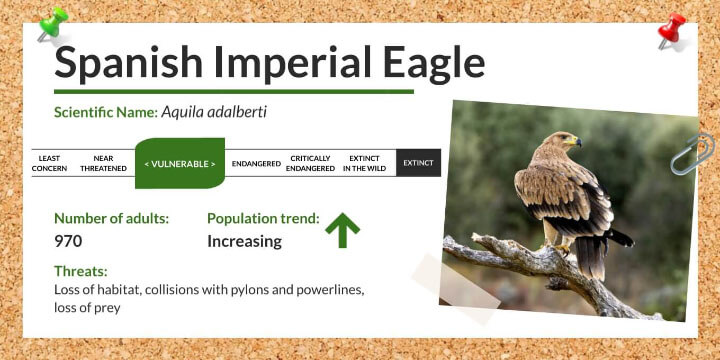 Despite this population recovery, the eagle is still at risk from a number of threats, such as loss of prey and habitat as well as collisions with power lines. Similar to the Iberian lynx, the Eagle has a taste for rabbits and has also been affected by the declining rabbit population as well as the continued loss of woodlands in the area.

Despite efforts to make power lines safer for birds across Spain and Portugal, electrocution is still a threat to Spanish eagles. In 2008, 33 eagles were found dead from electrocution in Spain. 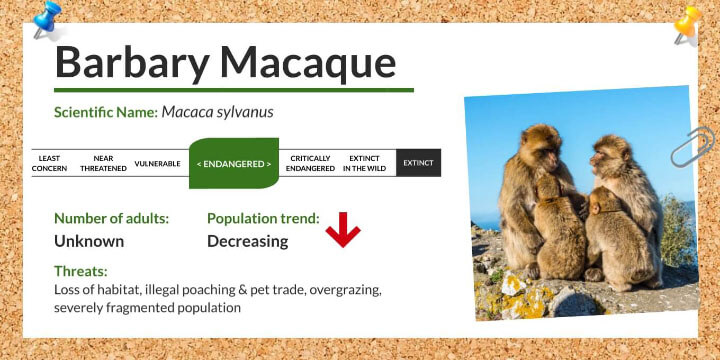 The Barbary Macaque is unique in being the only macaque that is found outside of Asia. The Barbary macaque is endangered and its population continues to decline due to habitat loss, poaching and the illegal pet trade in North Africa.

An estimated 300 infant macaques are smuggled out of Morocco each year as part of the illegal exotic pet trade, which cripples the species’ population growth. The species is also seen as a pest by farmers and hunted.

Loss of habitat from illegal logging is also having a devastating impact on the macaques who live in the oak, cedar and cork oak forests of the Atlas mountains. Logging leaves fragmented patches of forest that isolate macaques and reduce their breeding chances.

The macaques are uniquely linked to the forests and rely on them for shelter and food. In turn, the macaques support the forests by spreading seeds and controlling the insect population. Barbary Macaques are a great indicator of the health and quality of forests in the Atlas Mountains.

How Cork Is Helpful to Conservation Efforts

Habitat loss is a consistent threat to all of these species, which might be causing you to question our advocacy of buying cork products. This is because unlike other wood products, harvesting cork doesn’t require cutting down the tree. Instead, cork is harvested from the cork oak every 9 years in a process that doesn’t harm the tree.

This is why cork is one of those rare situations where buying the product encourages habitat growth rather than reducing it. Cork is completely natural and sustainable and can be used to replace a number of less sustainable or non-animal-friendly products. As cork is used in more ways, more cork forests will be grown to supply the demand which, in turn, creates a larger habitat for these endangered animals.

Dan Baker is a Content Writer that works with SPD UK, a family run cork supplier based in the UK.