Electric vehicles and other sustainable transport solutions are no longer seen as oddball alternatives to established forms of transport, and are fast becoming the norm. Driven by public concern over health issues and environmental impacts, sustainable forms of transport are now regarded as a necessity rather than a choice.

Sustainable transportation should ensure that everyone in society is able to access the transport solutions that they want and need in a safe and consistent manner. It should also limit emissions and waste decreasing its impact on the environment where possible but operates in a carbon neutral or carbon negative way.

Most Popular Fuels Types in the EU

Petrol cars still lead in the number of yearly registrations, however, they now make up only just above half of all registered vehicles (60%). The first six months of 2019 brought an increase in registrations of electrically chargeable vehicles, and if you add to this the number of other alternatively powered cars you get almost 12% of registered vehicles that are not powered by fossil fuels. 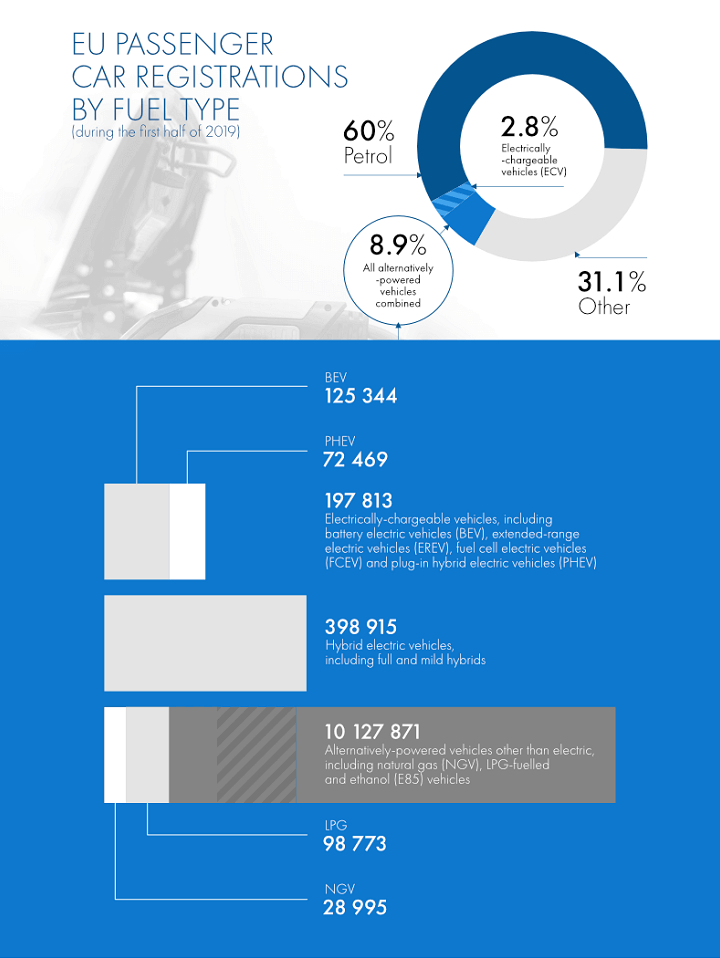 Electric cars had their biggest year ever in 2019 grabbing 2.2% of the global vehicle market over the first 10 months of 2019. Car manufacturers are planning to commit $225 billion to electrification in the coming years. This amount makes up nearly half of their investments, showing how serious the EV industry is becoming.

China leads in global sales. However, figures show that Europe is still ahead of the US in terms of new EV registrations, though the gap appears to be closing. The EU’s market is still dominated by sales of fossil-fuelled cars, but sales of EV’s are starting to catch up, and the continent is gearing up for an increased number of these on the road.

In response to projected sales, European Governments are gearing up by boosting the infrastructure required to run a large number of sustainable vehicles.

Many of the latest generation of sustainable vehicles are electric and rely on periodic recharging, and while many electric cars will be charged overnight at the home of the owner, there also needs to be sufficient publicly available charging points to ensure that vehicles can be recharged easily and conveniently. France and Germany lead the way with the introduction of the appropriate infrastructure, both having around 40 000 charging points across the country. They’re followed by the UK, Sweden and Spain. 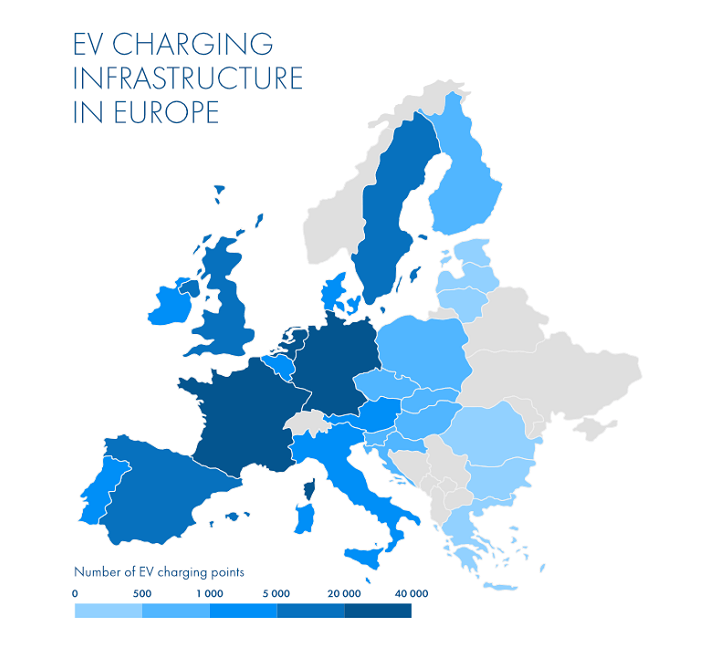 As well as EV charging points, biofuel and hydrogen-powered vehicles also need a high density of refuelling stations, though these can be adaptations of the current fossil-fuel stations which can be tailored to this use with only a small amount of modification. This infrastructure must be at least the same rate as sales or, ideally, faster, to ensure that potential customers see that it is worthwhile buying.

Research has found that a lack of infrastructure is a major reason for new customers not wanting to purchase a sustainable vehicle. Many people also think that the technology isn’t sufficiently established to make them want to buy an EV in particular. The chart below  shows the main reason consumers in the UK gave for not wanting to buy an EV. 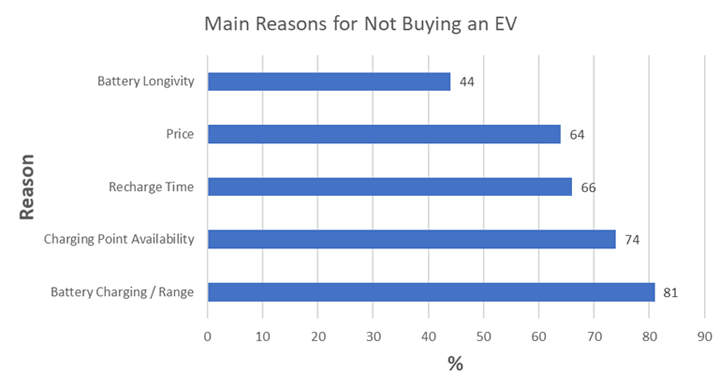 Main reasons for not buying an EV
Source: Aviva.co.uk

Data shows that most consumers are reticent to commit to buying because of both infrastructure (the main reason) and doubts about the technology, and these are the areas in which Governments and manufacturers must focus on in order to convince consumers that buying an EV is a viable option. Another major reason is the relatively high price of such a vehicle. The current average prices worldwide are shown below: 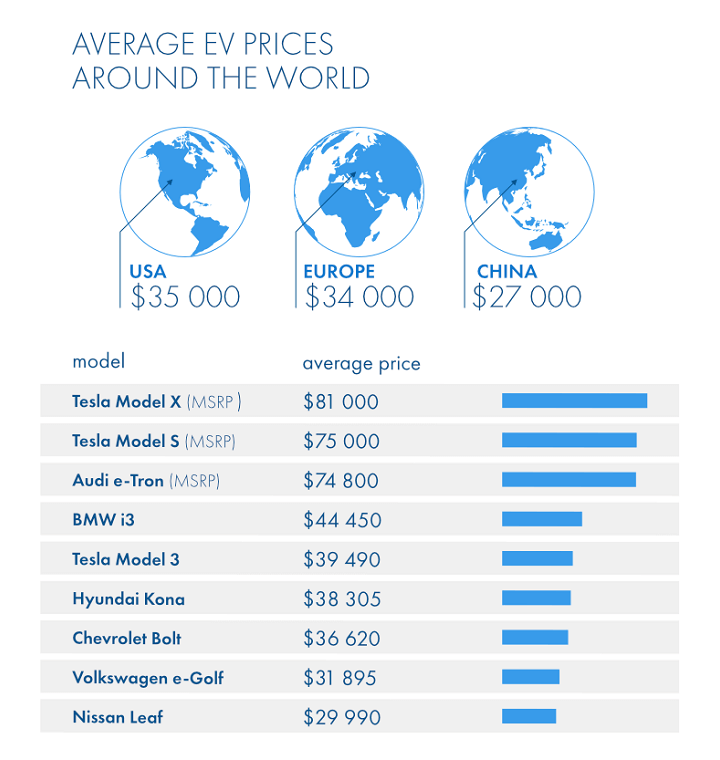 There are huge steps forward being made by manufacturers in terms of battery power and system efficiency, both of which contribute significantly to the usability of EVs in particular. Battery aging – the gradual breakdown of a battery under successive charges – is a real issue, and many manufacturers are working on alternatives to wet-type batteries, but EVs will remain sold in smaller numbers until this issue is resolved at least. Purchase price is also a significant issue and Governments must put pressure on manufacturers to reduce prices, thereby making these vehicles appeal to a greater market.

Until BEVs and PHEVs become cheaper to own, and promise greater travel distances with faster and easier charging, they won’t be able to overtake fossil fuelled cars.

Is the Popularity of Electric Cars expected to Increase?

What to Do to Hasten Electric Car Adoption

EV Sales Surge, But is the UK Ready For the Electric Revolution?

Creating An Electric Fleet For Your Business: A Practical Guide

What Makes The Tesla Model 3 So Appealing?

The Intensifying Battle for the Best Electric SUV

How Will Self-Driving Vehicles Impact the Environment?

How Will the Infrastructure Adapt to Electric Vehicles?

Green Car Technologies of the Future

The Future Is Green: EVs and What Is to Come

What It Takes for the Storage Market to Take Off? — Hydrogen Technology Possibilities and Challenges

Practical View on Getting an Electric Car