Finding an optimistic spin on deforestation, mass palm-oil usage, and the immense production of non-recyclable plastic can be difficult, especially when one considers the ways in which these elements have already begun to compound the process of global warming. With a plastic island the size of France floating in the Pacific Ocean and the economies of several countries locked into the production of palm oil, where do we look to find sustainable hope?

We look to the future. As more people are made aware of the negative impacts of palm oil production and non-recyclable plastic disposal, there has been a push to invoke active change through governmental legislation and economic evolution.

Palm Oil in the UK

Use of palm oil, for example, as an alternative fuel has been all but mandatory across the UK. Petrol has been cut with palm oil in what was originally believed to be an attempted at sustainability but what is now understood to be detrimental not only to the environmental health of the UK but that of Malaysia, Indonesia, and other tropical countries.

That’s why the sharing of information regarding palm oil production has become a powerful tool in the fight for a more sustainable future. The biggest companies (such as Nestle, Pepsico, and Unilever) are under pressure to reduce the deforestation that their big palm plantations require and to source only sustainable palm oil by 2020. Not only does this solution preserve the economic stability of the countries that produce palm oil, but it promises to make use of the product more environmentally-friendly. 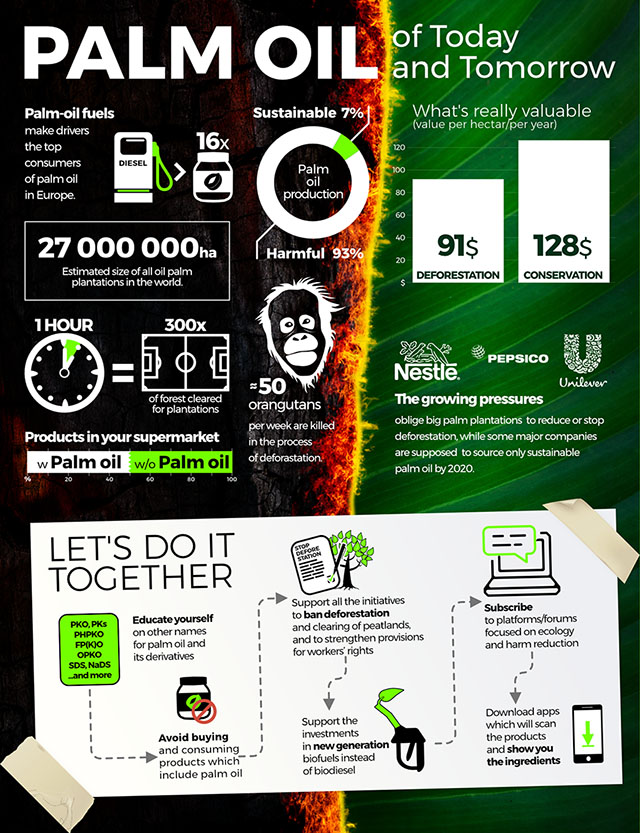 Plastics, too, while still in mass use, have caught the ear of journalists around the world. While banning plastic straws, cotton swabs, or other single-use goods may seem like a drop in the bucket of international sustainability, doing so still represents a step towards international acknowledgement of the troubling amount of plastic waste produced in the average year.

As with palm oil, though, moves have been made to reduce the plastic waste conglomerating on the sea floor. Different corporations have embraced more sustainable packaging, and the creation of green tyres has been altered to allow for their improved recyclability.

Change Starts With You

As the world moves to make these initial sustainable changes, so can you contribute to the overall lessening use of palm oils and non-sustainable plastics.

Change on a Corporate Level

Once you begin making changes in your own life, it’ll become easier to hold the corporations responsible for the vast majority of world-wide pollution. So show your values with your wallet and let the companies that use non-sustainable palm oil know that so long as they continue to contribute to mass deforestation, they won’t be making a profit. Advocate for legislative change alongside a community.

It’s when people come together that a disconcerting or overwhelming future becomes one that can be conquered.