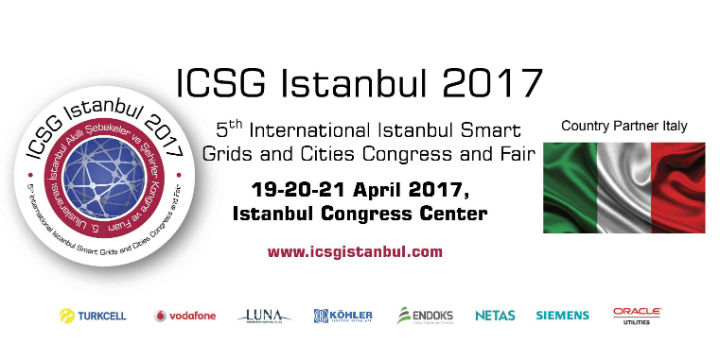 5th International Smart Grids and Cities Congress and Fair which is signified one of the most important events by IEEE Power and Energy Society will welcome important people from Turkey and all over the world. In CEO Panel, Limak Holding Chairman Mr. Nihat Ozdemir and AKSA Natural Gas Distribution Co. Chairman Mr. Yasar Arslan will contribute with their Speeches. Moreover, Israeli Smart Energy Association President Mr. Amos Lasker and Arab Renewable Energy Council (AREC) President & Jordan Prince Mr. Asem Bin Nayef will participate as a speaker. ICSG Istanbul 2017 will create an universal platform which brings together all the delegations coming from Asia, Europe, Middle East, Africa and America.

Limak Holding Chairman Mr. Nihat Ozdemir and AKSA Natural Gas Distribution Co. Chairman Mr. Yasar Arslan who influenced people with their national and international projects all over the world. In this panel, speakers will share their experiences, secrets of their successful projects,
future visions and opinions about smart grids.

Important speakers will participate to ICSG Istanbul 2017 from Gulf Countries

Taking an important step towards energy with Israel

After restoring the relations between Israel and Turkey, they both started their diplomatic relations again. ICSG Istanbul 2017 will host the president of Israeli Smart Energy Association (ISEA) Mr. Amos Lasker as a speaker. Last year, ICSG Istanbul 2016 has been organized with the country partnership of Sweden and Sweden Minister of Energy Mr. Ibrahim Baylan mentioned in his speech that smart grids increased their importance and they consider to initiate new projects with Turkey. This year, president of IEEE Power and Energy Society and Director of Virginia Tech ARI Prof. Dr. Saifur Rahman will be keynote speaker. Italy is in the first place as a country partner, United Kingdom, Japan, Azerbaijan, Oman, Kuwait and Saudi Arabia energy and industry ministers have been invited to the Opening Ceremony. Also Italy, England, Sweden, Jordan and Oman country panels will be organized within ICSG Istanbul 2017. Additionally, Dr. Mohammad Shahidehpour who is principal investigator of 60 million dollar worth of studying which is perseverative and developing in the fields of smartgrids is the other Keynote Speaker of ICSG Istanbul 2017.

Delegations from 50 countries will participate to ICSG Istanbul 2017

Turkey plays an important role in terms of its strategical position due to being close to Middle East and Caspian which has 70 percent of natural gas and oil reserve of the world. 5th International Smart Grids and Cities Congress and Fair will welcome delegations from 50 countries. During the Congress, highly important subjects such as energy management, energy efficiency, cyber security and remote control systems, future of energy, technology in energy will be discussed in detail.

The National Electric Power Company of Jordan (NEPCO) and American Energy Company (NOBLE) has signed an agreement for trading natural gas. NEPCO will participate to ICSG Istanbul 2017 and will create an opportunity to make partnerships with Turkish companies.