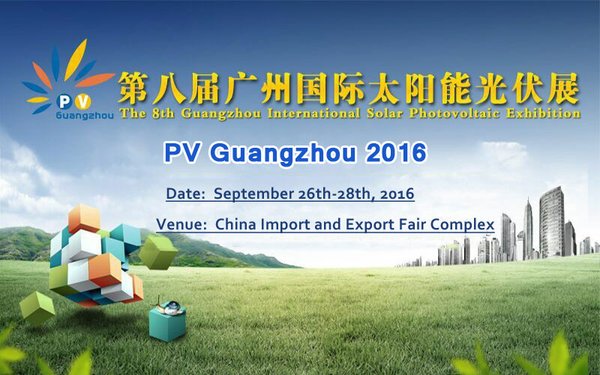 PV Guangzhou 2016 (8th Guangzhou International Solar Photovoltaic Exhibition) will lighting up during September 26 to 28 in China Import and Export Fair Complex. Now this event is in full swing.
Oversea media partners bringing a unprecedented wave in publicity
With the efforts of PV Guangzhou 2016 organizing committee, up to now, the cooperation with international media partners has made a great progress, bringing a unprecedented wave in publicity. The media partners include renowned associations: Saudi Arabia Solar Industries Association (SASIA), Solar GCC Alliance, Pakistan Solar Association, Pakistan Renewable Energy Society (PRES), Alliance for Rural Electrification (ARE), African Sustainable Energy Association(AFSEA); famous magazines: PV-Tech PRO, PI MAGAZINE ASIA, Solarnews Magazine, Era Solar Magazine, Solar Journal, Solar Today Magazine, EQ International Magazine, PV Magazine, Industry Focus-Clean Energy, EnergyNext Magazine, Alternative Energy Africa Magazine, SolarPro Magazine, Energía de Hoy, etc; and professional websites: AltEnergyMag, Bio Economic, E-EnergyMarket, Energy Trend, ENF Solar, iData Insights, Portalfotowoltaika.pl, PV Lighthouse, PV Resources, Renewable Energy.com.ua, Solar Business Hub, Energytrace, Biomass Events, Green Journal/Green Match, Energy Central, and so forth.
More and more enterprises joining the great feast
The great progress also shows in the rising number of exhibitors. PV Guangzhou attracts a great number of well-known domestic and overseas photovoltaic enterprises to exhibit every year. In 2016, more than 250 enterprises, like Yingli, Hanergy, South Sunlight, CSG, RITIAN, Zeversolar which have won a good reputation in the past years, will gather in PV Guangzhou as usual. Here listed a part of the new exhibitors of PV Guangzhou 2016.
What makes PV Guangzhou so attractive
PV Guangzhou enjoys a favorable policy advantage. Based on the prosperous development of the industry, manufacturing industry, and strong economic foundation, Guangdong Province is the top priority for distributed PV development. In addition to electricity subsidies of 0.42RMB / kWh, there are additional subsidies (draft) in Guangzhou, Foshan and Dongguan. Therefore, China’s government policies are an important element which contributes a lot to PV development in Guangdong.
PV Guangzhou has been held consecutively for 7 years and we have the confidence to say it will continue its success in 2016. If you want to seize the chance to catch a sight of its charming, please contact us so that we can send you some useful information to ensure you a fruitful trip.
Recent posts
Related posts