It’s a Wind Turbine, but If It Was a Violin, It Would Be a Stradivarius

A New Era For Wind Power in the UK

A Stradivarius is known for its exceptional qualities as a musical instrument, an iconic name with an unrivalled reputation. X-Wind pride themselves in their quality engineering, reliability and aerodynamic performance. It’s a wind turbine but much, much quieter than a Stradivarius.

Did you know, that according to The Economist, on current trends renewables would make up 20% of global energy supply by 2030?

The wind power sector continues to grow rapidly with opportunities for new entrants to develop technology that addresses both existing and new markets. In 2014 in the UK renewables generated a whopping 19% of the total electricity generation- 53.7TWh (Source Department of Energy and Climate Change), still leaving the UK dependant on huge fuel imports for 47% of electricity generation or 198 million tonnes of oil equivalent.

Growth and innovation in the wind energy sector is constantly driving the cost of energy down, with onshore wind predicted to be the cheapest source of electricity within five years (Onshore Wind Cost Reduction Taskforce, 2015). One of the companies at the forefront of new wind technology is X-Wind Power, UK based designers and manufacturers of new revolutionary medium scale vertical-axis wind turbine. Over the past 3 years, the technology has been endorsed by Innovate UK, The Department of Energy & Climate Change, Carbon Limiting Technologies and Mott MacDonald.

What Makes the XW-80 Turbine Unique?

X-Wind is unique in the market, allowing land-owners the opportunity to develop sites which were previously thought as too difficult for a wind project. Some unique features of the XW-80 include:

Wind turbines and solar PV complement each other extremely well as their output is usually produced at different times of  the day and at differing times of the year. Wind energy daily peaks are at sunrise and sunset (due to the thermal effect of land cooling) and during Autumn, Winter and Spring months, while solar PV peaks during the middle of the day during the summer. This allows for the two technologies to be connected jointly into a single connection point, without the need to upgrade the supply, capitalising on existing infrastructure with no requirement for grid upgrades.

An XW-80 is perfectly suited for integration with solar energy technology, due to 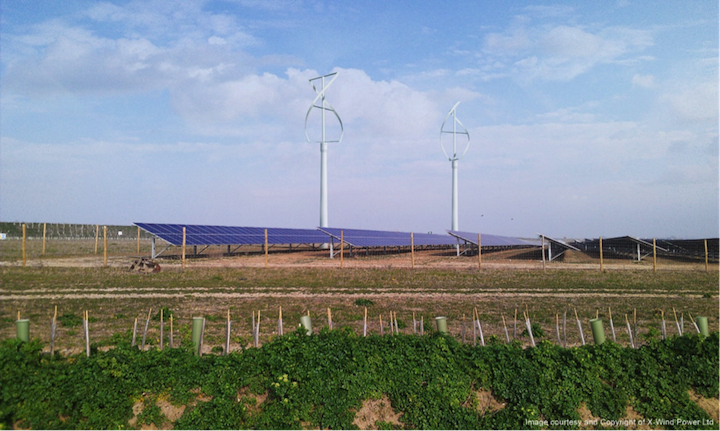 X-Wind was formed on the Isle of White in late 2010 by ex-Formula 1 designer Michael Blaize. X-Wind moved to Discovery Park in Kent in January 2014 and now has a growing team of 20 people. The team has recently finished the design of the XW-80 to be used on site to power businesses, communities and infrastructure. Since 2013, X-Wind has won 5 grant awards and a regional growth fund loan, equating to over £1.3 million of funding. X-Wind now has a substantial and growing number of project opportunities across the UK, with the first installation due around September 2015.