How Far Is the UK from its Renewable Targets?

In 2007, the then Prime Minister Tony Blair signed the UK for a European Union target to produce 20% of the continent’s energy from renewable sources by 2020. Government officials started panicking, given the fact the UK was generating merely 1.8% of its energy (5.6% electricity) from renewables in 2007, thus reaching their target would need a huge effort. In 2008, two departments were fused to create the Department for Energy and Climate Change This ministry would be capable of delivering the right results for the task. Five years later, the country has experienced significant improvements and according to the latest government numbers, the UK is on track to meet their 2020 target. Since the launch of the government’s renewable energy roadmap, the UK is also on its way to hit the country-specific target of producing 15% of its energy from green energy by the end of this decade. The country’s fast paced development in green energy must maintain a level of at least 16.5% per year in order to reach their goal. 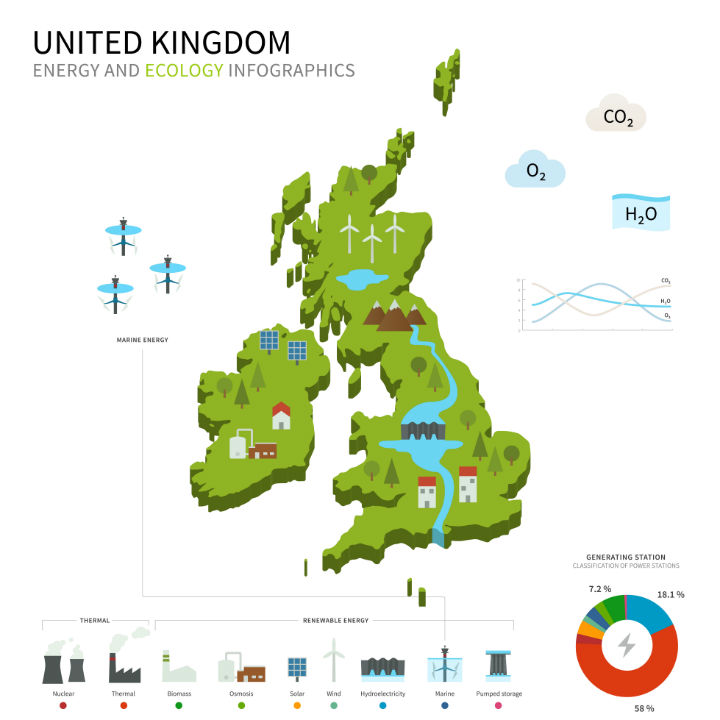 The latest roadmap update in 2013 reveals how much the renewable energy sector has developed. Between July 2012 and June 2013, UK’s capacity to produce power from clean energy technologies grew by 38% to 19.5 gigawatts (GW). To be a bit more specific, in the second quarter of 2013, the country has generated 15.5% of its electricity, which is more than 4% of overall energy supply from renewables. The progress has been catalogued as being very good. The government calculated that 4.1% of UK’s energy came from clean energy sources in 2012, better than the EU interim target of 4.04%.

Although the early results underline the efforts taken, the European Renewable Energy Council announced that the UK remains in 25th place out of the 27 EU member states when it comes to the amount of energy it generates from renewables. This hasn’t been at all surprising, given the UK has started from a very low base. The government lead by David Cameron has assured the people of the UK of its commitment to increase the number of renewable energy sources all around the country in sectors such as electricity, transport, and heat. Hence, this will enable the UK to be more secure of its energy earnings and will protect consumers from fossil fuel price fluctuations. It also helps developing new jobs and businesses in the renewables sector, and keeping the country on track to meet the CO2 emissions objectives.

However, based on current information supplied by the Renewable Energy Roadmap, the UK has taken or already started taking the right decisions regarding their renewable energy industry. These decisions include:

The UK doesn’t have a renewable energy target after 2020, and it will be the first time in almost two decades when there is no clear national target. The effect on the development of green technology industry is at the moment unclear. The energy and climate change secretary, Ed Davey, stated no target was required as the government’s carbon budgets would require a huge growth in low-carbon power. However, this could also come from nuclear energy, carbon capture and storage, or an expansion of the use of gas, Davey declaring “The market will decide”.

Renewable energy experts responded to this statement, arguing that the cost of coal and gas-fired technology prices will only go up, and leave renewable energy in a clear disadvantage and the UK in a dangerous situation regarding climate change. Moreover, the government failed to explain why they offered the French nuclear company EDF a guaranteed income of at least £80bn from energy bill-payers in order to ensure that a new nuclear power plant is built in Somerset. This would result in twice as high electricity prices.

The lack of a national green energy target will lead to major changes, as current objectives run up to 2020 and have been credited with helping the development of wind and solar power, which now deliver 15% of electricity generation.